Footsbarn Travelling Theatre is one of the world’s leading touring theatre companies performing, for the most part, in its circus big top throughout the world.  Footsbarn Travelling Theatre was born out of a dream to create a form of theatre that was popular, generous and accessible to all. To take theatre out of the limits of traditional performance environments, and bring it to a local population, by visiting farms, beaches, streets and village squares, with their unique brand of innovative and vibrant productions.

Footsbarn Travelling Theatre began life in Cornwall, UK in 1971, when a group of young performers began rehearsing in the barn of Trewen, a farmhouse near the village of Trewidland.

One of the founder members was Oliver Foot, and it was his family’s barn that was used, hence the company adopted the name Foot’s barn, after which, they quickly became known as Footsbarn and the name has stayed with them ever since.

In their early years, Footsbarn travelled to remote areas of Cornwall and the UK on the back of trucks, performing in village squares to whoever wanted to watch, and passing a hat round afterwards.

The first performances took place in local halls, prisons, car parks and on the beach. They featured Cornish legends and giant puppets bearing Cornish names. Oliver would wear a top hat, and, through a megaphone call out an invitation throughout the town to come and witness the only giraffe that swims. Soon other young performers joined them and Footsbarn’s reputation began to grow as a groundbreaking, innovative and entirely original, new style of Theatre.

In 1984, the company left Britain to take its pioneering style to international audiences, they bought a tent and became a bonafide itinerant Theatre Company, constantly on the move, whilst their reputation for rich, immersive, and eclectic theatre grew and grew.

They remained without a base until 1991, travelling as far afield as India, Africa, Australia and South America.

The troupe eventually landed in central France, where a farm was purchased, La Chaussée and still remains the Footsbarn’s base, providing a home over the last 25 years for the company and their two big tents, vehicles and caravans, as well as a fully equipped production centre complete with workshops, rehearsal space, office and studios.

From La Chaussee, Footsbarn stages regular workshops taught both by actors from the company, as well as other theatre professionals. They also provide residencies, performances, music concerts and community events, as well as rehearsing and producing their own shows.

We consider theatre in all its aspects. 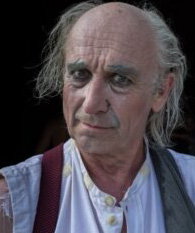 We use masks, costumes, colours a lot; we play in the audience and around it; we make live music; we dance, we sing, we move, we do acrobatics… The goal is to stimulate the imagination with a piece of string sometimes, a piece of costume… That’s what makes us strong. People recognise it because they always talk about the team, the style of Footsbarn and not the people who make up the troupe.

Footsbarn is born in Cornwall, Great Britain.  The company created its shows in a barn on the Foot family’s farm calling themselves Foot’s Barn Theatre.  Quickly they became Footsbarn and the name has stayed with them ever since.

Footsbarn left England to became a truly itinerant travelling theatre company. They spent the next ten years on the road enjoying enormous success and enthusiastic audiences wherever they played.

In 1991, the company bought a dilapidated farmhouse in the heart of the Bourbonnais. They renovated the buildings and equipped them to provide a welcoming centre for artistic creation and training for Footsbarn and all the artists who work with them.

In 1991, the company bought a dilapidated farmhouse in the heart of the Bourbonnais. They renovated the buildings and equipped them to provide a welcoming centre for artistic creation and training for Footsbarn and all the artists who work with them.

Footsbarn still continues to tour and perform, and continues to grow.  A new collaboration with Oscar-winning, Irish singer-songwriter Glen Hansard sees work start on an adaptation of The Crock of Gold a comic folklore novel written by Irish author James Stephens. The production is put on hold because of the coronavirus pandemic.

Footsbarn celebrates its 50th year and premieres The Crock of Gold with a series of performances at the Irish Cultural Centre in Paris. The company also marks its birthday with a two-weekend arts festival at La Chaussee, its home in France, which is attended by friends, family and fans of the troupe as well as special performances from international artists connected to Footsbarn.

With the founders of Footsbarn approaching retirement from the day-to-day running of the business, for the first time the company appoints an artistic director, Sadie Jemmett, from outside its ranks. Work begins on a new, full artist programme and the renovation of La Chaussee to make it a modern and sustainable arts centre fit for the 21st Century.

Sadie Jemmett was appointed as Footsbarn Theatre’s new Artistic Director in 2022, and is supported by founder members Paddy & Freddy Hayter and the Footsbarn Travelling Theatre Board of Trustees.